On Saturday (April 20), we performed Hullaba Lulu at the Little Angel Theatre in Islington, London. For many puppeteers, this is a very storied place and for me, a puppet geek, this was a bit of a dream come true.

It’s been  the “Home of British Puppetry” since John Wright and his company first converted an old temperance hall in 1961 and spent many years making beautiful marionette theatre which inspired generations. Though John Wright has passed away, the company is still very active making shows for their space as well as taking their shows on tour.

I remember hearing about Little Angel from Eric Bass of Sandglass Theatre. We performed The Vertigo of Sheep in their gorgeous barn turned into a puppet theatre in Vermont. Eric had spent some time training at Little Angel and was inspired not only by the work but by the culture of the living and work space. 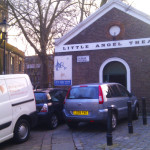 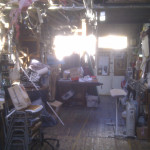 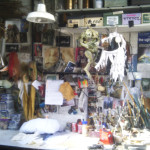 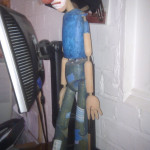 This puppet had such smooth, balanced head and arm movements–a real inspiration 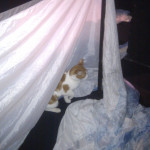 Larry decided to make a bed in our set

The stage is a narrow but deep space, just perfect for puppet theatre–though as it was made for marionettes, the permanent puppet bridge (don’t see many of those anymore) required us to make some adjustments to the height of our sea cloths and moon shadow screen. (But not so bad as we had to do a similar trick when we playing in the studio at Lawrence Batley Theatre!)

Despite a very rare sunny day, we had pretty decent houses: nearly full for the 11am show and about half full for the 2pm show. We had some really great feedback from the audience and the staff–and these are people who see a lot of puppet shows coming through. So hopefully, we’ll be there again soon.