Our hippo had a fantastic time at the Fish and Chips Festival in Sotteville-lès-Rouen, Normandy. It’s a street theatre festival produced by Atelier 231  featuring British street acts booked by Xtrax.

It was our first gig in France and the first time the Hippo’s left the country so we were very excited. We performed two evenings so we had a chance to take in the sites across the river in Rouen during the day. Highlights included Rouen Cathedral (famous from Monet’s paintings) and the site where Joan of Arc was burned at the stake. We walked lovely pedestrianised streets which were part old and part reconstructed to look old (after the severe bombings from WW2) and, of course, visited our share of cafes and boulangeries. 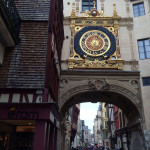 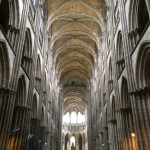 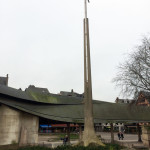 The site where Joan of Arc was burned at the stake 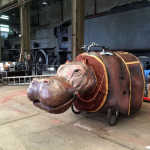 Hippo prepares for his French fans. Check out the giant train in the back which is entirely MADE OF WOOD! 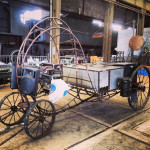 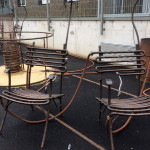 Genius heated seats by La Compagnie Carabosse. How can you have a winter festival without these? 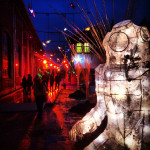 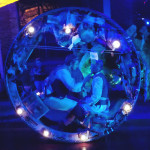 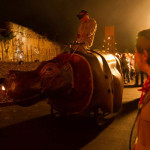 Hippo in France; photo by Atelier231 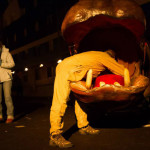 There’s something in his throat…, photo by Atelier231 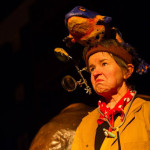 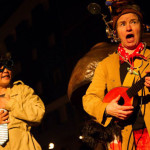 Singing about the frog in his throat; photo by Atelier231 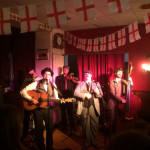 Sound of old timey Americana (Dr. Butler’s Hatstand Medicine Band) in a fake English pub in France–wait, where am I? 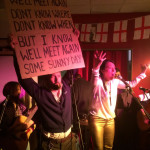 The Strangelings faux pub landlords take out the festival in style. 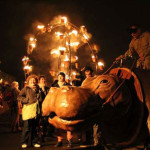 The act went well, crowds seemed to really enjoy the hippo (even if they were a bit baffled by the storytelling part of it, our French being non-existent) and the hippo behaved himself. We need to work out how to build lights into him for night gigs. That or accept that a large hippo will suddenly emerge out of the darkness and freak out festival goers.

The festival was a great mix of friends we regularly meet along the British street theatre scene (Pif-Paf, Acrojou, Artizani, Dr. Butler’s Hatstand Medicine Band) and some impressive French companies such as a lovely fire garden by La Compagnie Carabosse and what was perhaps the best fire performance I’ve ever seen, Passage by La Salamandre.